I went into this marathon feeling woefully unprepared.  Under trained.  Out of shape.  You name it.

I lost a week of training after crashing my bike in August (thank you mild concussion and 5 stitches in my eyebrow).  Then I ran the River Run half marathon (still stitched up, for extra badass points) faster than I should have, which left me tired and sore and unable to do my 2nd 20 miler. 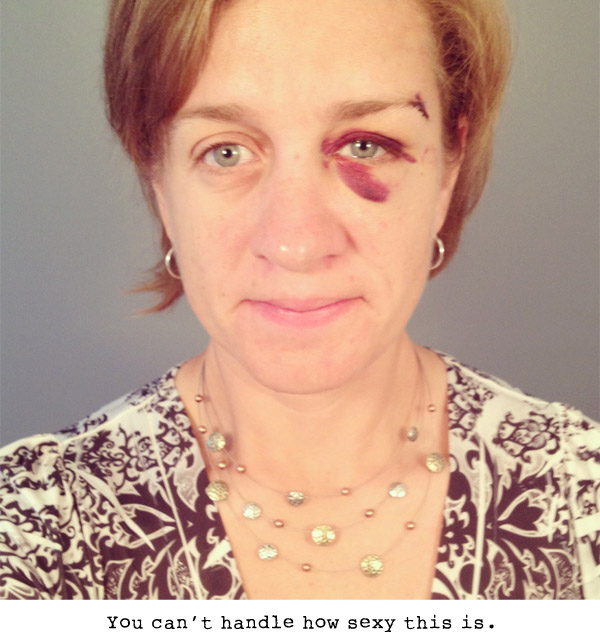 Worse than that, Akron was merely supposed to be my THIRD 20 miler, done as a training run, in preparation for Columbus 3 weeks later.  So the plan was… train hard up and through Akron, then taper.

The plan was not: crash bike, lounge about, skip 20 miler, taper early, run Akron.  Just to make that part clear.

To add to my anxiety about this, last year’s Akron was when I was in the best shape I’ve been in. I was running well, I was cross training like a boss.  And I was 10lbs lighter.  Last year, I felt like a champ going into Akron (and that’s where my PR is!).  This year, chump.

But, as I’ve learned over the past few years of racing, it’s gonna be whatever it is, so I might as well just get it over with.  Which is what you’ll wish I’d done with this post soon, because it’s gonna be long.

Up at 4:45 to catch the carpool.  My brilliant ideas start early.  I warned them they better not forget me at the race.  For, you see, I am poky the pudgy loser compared to most of the people I associate.  They probably all beat me by an hour.

I lined up randomly around the 4:30 people, with no intention of running with them, just as a general idea of a good place to start.  Gun went off.  Moseyed my way toward the start.  Why does everyone start running way back in the corral?  I don’t run until I cross that mat.  26.2 miles is quite far enough TYVFM, I don’t need to tack on 1/4 mile from way back here.

Except for this little detail at mile 2: Man Drops Dead at Akron – Lives to Tell. There’s nothing like seeing a man, grey, receiving CPR to scare/horrify/somber you. There aren’t words for how relieved (and surprised) I was to find out that he recovered. He looked bad when I went by. Well, he looked dead.

So, as you can see, I was cruising along fairly well there. I’d told my friends to expect me around the 5:00 mark, but I thought I could probably coast in at 4:50 easily, and still be in pretty good shape for both the rest of the day, and for Columbus. I’m not sure what happened at mile 7-8, but I didn’t care. My average pace at that point was still a bit ahead of where I thought I’d be. The 9:48 mile was where the new steep scary downhill was.

By this point of the race, we were on the Towpath, which meant 2 things. One, I was losing distance because it’s hard to run the tangents when the path is so curvy, and two – this shit got boring. I did make a friend along that stretch, so it was nice to run with someone for a while. I laughed when he told me he hated this part and couldn’t wait until we got back onto the road. I laughed because I knew what was ahead of us on the road. 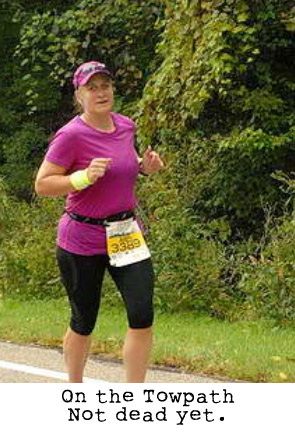 Sand Run park. Normally one of my favorite places on earth to run, even during the marathon. Gradual uphill for 3 miles, but absolutely gorgeous. And I like hills. Usually.

Not bad. But this is where the course changed. Instead of continuing up the gradual incline, we made a left on Sand Run road. Which was pretty much straight up into hell. Or however that works. I had to walk part of it.

In theory, I was still fine. But emotionally, this is where I checked out. Miles 17-18 are always the start of my undoing in any marathon, so to have a demoralizing hill RIGHT THERE definitely didn’t do me any favors. Still, I pressed on. I knew we were almost to Stan Hywet Gardens, and I knew in my mind that once I got there, the worst of it was behind me.

Hmm. I’m at Stan Hywet now and… I still feel like roasted ass. I’ve apparently reached F it status now because I walked for a bit (obviously). Normal internal dialogue of “come on Angie, get this shit over with, you’re just making it take longer”. I’m my own worst bully. It definitely wasn’t getting any easier, but I chugged out the last miles as best I could.

What’s scary about those last 4 splits is I WAS running. I felt like I was running in waist deep quicksand during a hurricane, but I was running nonetheless. All I wanted to do was sit down and throw up. Not necessarily in that order.

I crossed the finish line in 4:40:02 – well ahead of where I thought I would. Well ahead of “do Akron as a training run” also, considering I’d done most of my long runs this cycle around 11 min pace. My Garmin pace for this one was 10:34. 6 minutes slower than last year, 10 minutes faster than my spring races (85° and sunny for both). 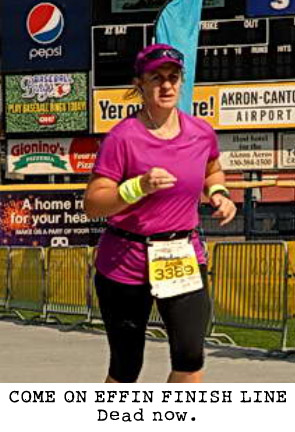 I immediately cradled the garbage can thinking I’d throw up, then once I realized I either wasn’t going to, or didn’t care, I sat down. Right there. Which of course caused medical to rush to my side, making it 2 marathons in a row that I’ve had medical rush to me when I finished. I think it’s because I’m so beautiful.

I only needed to sit for a minute or 2 and then I was good to go get my food and CHOCOLATE MILK RIGHT DAMN NOW and sit on the turf and chill for a few. Of course, as I said earlier, my friends had been done for 3 hours or whatever, so they were pretty much ready to go by this time, just as I’d taken off my shoes. I wasn’t particularly excited about shoving my swollen sausages back into those suckers*, so I figured I’d just walk back to the car in my socks. Which worked fine until we got to the edge of the stadium field where I realized I’d have to walk through red clay. So, I put them back on. Helpful hint: Don’t do this. I bent down to put the right one on, and my calf completely cramped. “#&*#& )@*#@&#*(@ *$&#$”, I could be heard saying. Repeat for the left leg, when it did the same thing.

But, I made it. All the way to the car and everything. Another marathon done.

*I wore my Nike Lunarglide+ 4s for this race. I normally wear a 10, and most of my running shoes are 10.5. But my OLD Lunarglides were 10s, and served me well, so I got 10 in the new ones. They weren’t AS roomy as the old ones, but they served me well for 3 long runs, so I went with them. Things were great until my feet swelled up around mile 22. Now I have 3 lovely black toenails. After I gave a big speech about not wearing shoes that aren’t big enough and how that’s what causes black toenails. BUT SEE? I WAS RIGHT? Ugh. Hope they stay on until the next race…