I knew I’d gotten fat and slow over the summer, today was the day I got to find out HOW fat and slow.

First lets spend some time talking about how well prepared and organized I am. Always.

Yesterday I had a 3 hour dead car battery fiasco (not my fault, just my problem) that I’ll spare you the details of, just know it happened as it is part of this whole story.

The plan was for us to meet at the race at 7:30 for an 8:30 start. I got up, ate my breakfast, drank my coffee, did the dishes… you know, my usual glamorous stuff. I head out the door right at 7, as planned.

As I’m 1.5 miles from my house, the car is acting funny, so immediately I’m like omg not the battery again. What if it doesn’t start after the race? Think I had the (brand new yesterday) jumper cables with me? Of course not, I left them in the garage. I debated going back for them, but ultimately decided that out of 1000 people, someone would have cables if I needed a jump, and if not, there was always roadside assistance if it came to it.

So, I carried on.

My plan for this race was to not look at my watch. I played soccer pretty hard this week, and my lymph nodes have been enlarged for a few days, signaling imminent death. Or a cold. Or whatever. When I do this, I usually end up running the same pace anyway, just with less emotional turmoil. “OMG TOO FAST WILL DIE BETTER SLOW DOWN” or “OMG TOO SLOW YOU SUCK FAT ASS”. You know, my little inner pep talks.

Then I realized I’d forgotten my watch, too. Oh well. I would have liked to have it just so I could look at the splits later, but not the end of the world. By now I’m about halfway there. Then it hit me.

I also forgot my iPod.

A normal person could easily run a 5k without their iPod. I, my friends, am not a normal person. What happens when I don’t have mine? I get ONE LINE from the most annoying song you can imagine stuck in my head on repeat. I wouldn’t even mind if it was at least the entire annoying song. Nope, one line.

Now I have to go back. I figured I’d still be fine, since even if I turned back, I’d still be there at 8 for an 8:30 race. Phil could grab my bib and such so that I could just roll in and be ready to go. Of course… I also had no gas in the van.

I made it. Without needing to stop at a gas station. Music and watch engaged. I parked at the RTA lot and jogged down, figuring I had about 20 min til race start. I get almost there and I find Phil and he says “oh I just found out the race doesn’t start until 9:15″. OF COURSE. Oh well. At least it wasn’t 8:15. So we sat in his car doing nothing other than make fun of everyone who walked by us on their way to the start line. DUDE! What the heck is that girl wearing? Are those trail shoes? You know, that kind of mature stuff.

So then… we figure we’ll run a mile to warm up and then saunter on over to the start. So we take off running (in the opposite direction of the race, because who wants to run the course twice). We’re chatting along lalalala when suddenly he says “uh… we’ve gone a mile”. Oops. Now we’re a mile from the race. With about 12 min til go time. Not that we won’t make it, but that’s not exactly what I had in mind. We trot back and stroll up to the start just in time for the race announcements.

She sends us off and about 45 people go zooming by me. Hmm. This isn’t how I pictured this. But I pressed on. Felt like I was moving at a decent pace, although I didn’t feel super fantastic. I was already wondering how I’d hold on to this pace for 3 miles when I hit the 1 mile mark. As my watch vibrated, I let myself glance at it… 8:27. Well, shit. I’d hoped to run 8 min miles. So of course now the realization is, I already feel like total hell, there’s no way I’m going to be able to SPEED UP to make up for that lost 30 seconds. In typical Angie fashion, I was like ‘welp, screw it’.

I didn’t exactly give up, but I didn’t exactly go all out, either. Unlike at Spring Classic, there were a zillion women in front of me, so I knew I had no chance to win, so no motivation there. If I know I’m in 4th or 5th place overall, I’m far more motivated than when I just feel like I’m in the middle of the pack. I did, however, walk a couple times in the last mile. Just for 3-5 seconds. Long enough to catch my breath and realize that I was acting like a big baby asshole.

Not sure where I came in. 27:XX. My PR (from 6 months ago) is in the 25s, so needless to say, I wasn’t super excited about my time. But at least this happened: 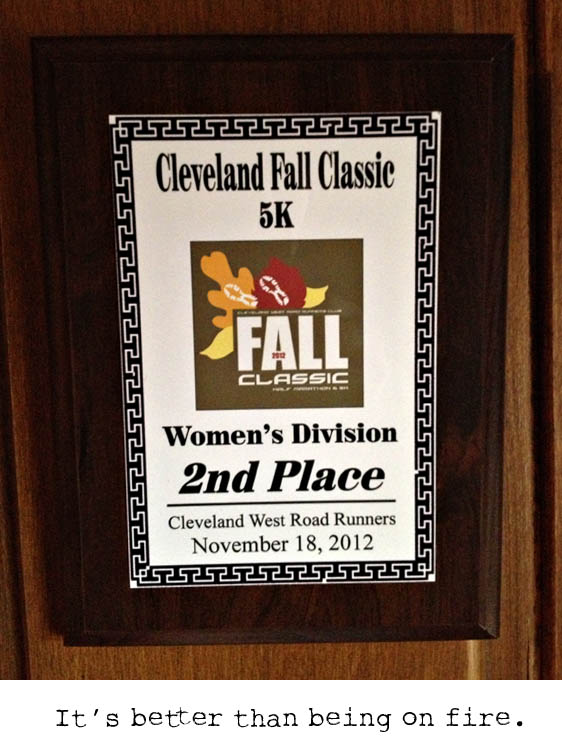 2nd in Women 40-44. Hopefully there were at least 3 of us. But, either way, an age group award always takes some of the sting out of a bad race.

On the upside, I now have a better baseline to base my training on. I suck at marathons, so it’s hard to use my marathon time as a guide. I only ran one half this year, and that was with a concussion and stitches in my head, so that wasn’t the best sample race, either. Obviously this wasn’t as well as I could have performed had I not run like a 20 year old for an hour at soccer last night, but close enough. It’s a place to start for the next race.

One thought on “5k Fall Classic aka BLAH”