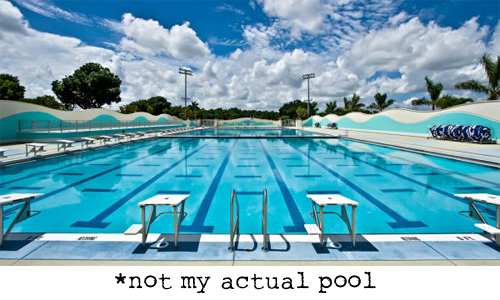 I’ve been trying this swimming thing for a while now.  Last summer (2011) I took private lessons at the rec center.  They assigned me this poor adorable little high school swimmer that looked like she would turn to dust if anyone yelled BOO!  She did her best to help me, but really she wasn’t sure what my problem even was.  And I was completely frustrated.  I feel like I am fit enough to swim, but I get in the pool, swim one length, and die.

Despite those failures, I still signed up for, and completed a sprint triathlon that fall.  The swimming… well I am here. That’s about it.  I did very little actual swimming and quite a bit doggie paddling and resting. I was literally the last woman out of the water.  But that’s another story.

This summer, I took a few lessons with the Total Immersion people.  That did help quite a bit.  They took my form back to the beginning and after just the first lesson I had a total aha! moment.  I was swimming with my head too far up and my butt too far down.  I was basically moving through the water like a seahorse. A big fat landlubbing seahorse.  Quite a visual, I’m sure.

They taught me to get my head and chest down, and that if I put my HEAD in the water, and not just my face, I actually wouldn’t instantly drown.  Also, that I didn’t need to pick my head up so far out of the water that I could look around and scan all 4 corners of the gym just to take a breath.  And that once I got my butt up, I didn’t need to kick as hard, which meant I wasn’t using up all my energy engaging my quads.  But still I was gassed far before I felt like I should be.  And I didn’t have the balls to sign up for a tri this year, even though I also took a triathlon clinic, and learned lots of little tips about the swim, and about the bike.

But damn it, I’m determined to conquer this thing!

Monday I headed to the pool.  My commitment was that I’d do 20 lengths of kicking with the kick board.  No swimming, no head in water, no exhaustion, just some kicking.  That shit is ridiculous!  I did one lap of that nonsense and decided I’d actually rather swim.  At a couple spots, I’d actually stopped making forward progress.  WTF?  So anyway, I said I’d swim a couple laps since I was already there and in the water.  I just tried to take it slow, and allowed myself to stop for 10-15 breaths at the end of each lap (50m).  I focused on form, worked out how often I wanted to breathe, and just swam along.

Much like running, the first 2-3 laps were awful.  But then… something happened.  I was gliding along, actually enjoying it. I wasn’t dying, my breaks were getting shorter, and I was doing fine  I stopped at 9 laps figuring that was a good half mile.  I realized later it was only 1/4 mile, and that I can’t do math when I focus on it, never mind when I’m focusing on not drowning.  But, no matter, I was excited! I couldn’t wait until it was time to swim again!

Which was today.  I was determined that I’d swim 1/2 mile today.  When I got there, the HS swim team was practicing, so there were no open lanes.  But I was there, and dressed, and I decided I’d wait.  About 30 minutes later, they cleared out, but another group came in.  That group left a couple lanes open, so I went and asked if I could use one and they said sure.  Off I went!

Once again, the first 2-3 were not great, but I pressed on.  Once again, it clicked and I was just swimming.  I did the last 2 of my 16 scheduled laps without my mini break. Then I kept going to see if I could make it 4 without stopping.  And I did.  I was going to see if I could go another 4 to make it 8 without stopping (the length of the swim at the triathlon), but my daughter was sitting on the edge of the pool staring at me, so I stopped at 18 laps.  900 meters.  More than a half mile.

I seriously can’t believe it.  This is one of my great life accomplishments.  Right up there with running my first 5k.  I am in shock that I can actually do this!  And I don’t hate it!

I can’t wait until I swim a mile.  I can’t believe I just said that.  I don’t even know who I am any more.

2 thoughts on “Slaying the Water Dragon”