Aww. It was bound to happen sooner or later. Worked out that it was at this freebie / club / just for fun race – although that was probably one of the mitigating factors, because I can be pretty stubborn in a “real” race. Here’s how it all went down…

This was the 3rd Annual Medina County Road Runners 50k, this year with a 25k option. The first year, I volunteered and it was approximately 10-400° below zero with winds like you wouldn’t believe. No joke. Ok maybe not -400°, but once it’s below 0° it all feels the same – EFFING COLD. I nearly died. I cuddled with a complete stranger. Not exaggerating. No shame when I’m cold. The second year, it was raining. (again I only volunteered) So, I won’t complain too much about 20-30s with a slight wind, even though I WAS cold. It was by far the best weather this race has ever had.

My plan going in was to do the 25k and call it my long run for the week. Not race it, mind you, just do my long run pace (10:30ish) and call it a day. The race is done on a 5 mile loop through Buckeye Woods, which is part paved, part dirt, and part trails. It’s a nice variety of surfaces, and relatively flat, so not too hard as far as a 50k goes. Since 50k is 31 miles, they need another mile in there, so they do that first. 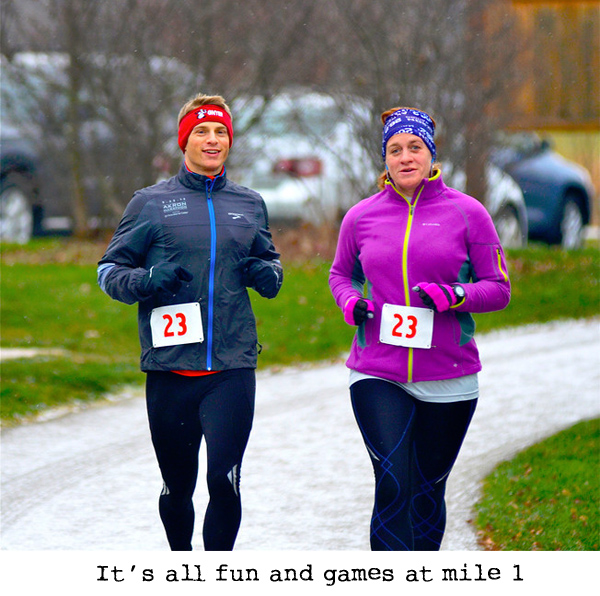 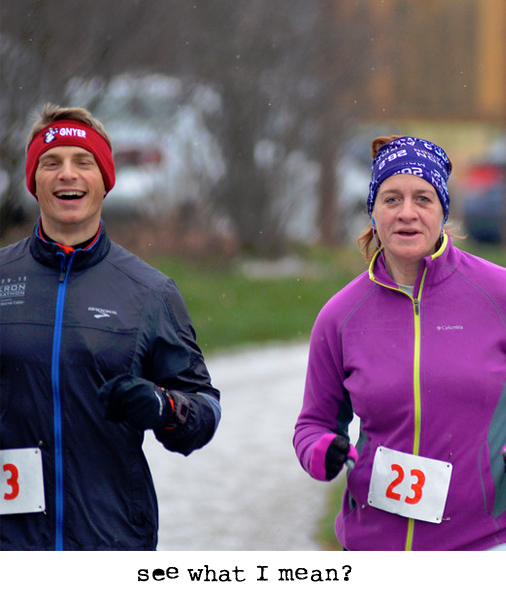 We took off as a group to run the 1 mile (which is a different course than the 5 mile loop), then off we went. Somewhere around mile 2, Phil said “uh… is this the pace you want to do?”. I looked down and was an average of 9:40. Oops, definitely not. So I sent him on his merry (younger and stronger) way and slowed down to a more appropriate pace for me. Of course, this caused everyone to start passing me. Mostly I don’t mind, I’m used to it, but eventually I was all alone with no one anywhere near me. (Except Verrelle who passed me going one way or the other about 29 times. Fast fucker.) I felt good for the first loop, came in and got my delicious Honey Stinger Waffle and my handheld water bottle of Gatorade and took off for the second loop. I left my watch running during the stop since the event was being Half Assed Timed*, but I don’t think I loitered there too long. 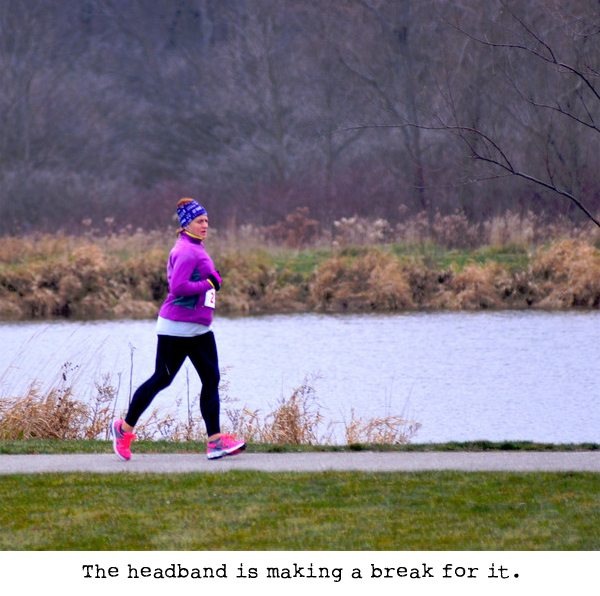 Just as I started my 2nd loop, Marsha and Charles passed me (again – they’d spent more time at the aid station than I did) and said that everyone that was behind them except me had gone the wrong way and cut a half mile off of the course. Grr. No wonder I was so alone out there! A couple miles into that loop, my legs started moving slower and slower. Cardiovascularly I felt ok, but my legs just would NOT move. Not only was I crawling along at about a 12 min per mile pace, but I was tripping over every rock, stick, root, twig, light breeze, invisible trip wire. I was also lonely and bored out of my mind. So, I decided I’d just cut it off at 2 loops.

In theory, knowing that I only had 3 miles left probably should have perked me up, but in reality, I think it only slowed me down more. Since at that point, I’d mentally checked out completely and just wanted to be done. I was kind of annoyed as my mood was fine, and my breathing was fine, my legs just wouldn’t cooperate.

Then again, this is why I usually run long on Saturdays. With soccer on Saturday nights… it doesn’t make for fresh legs on Sunday morning. I suppose this was my not-so-gentle reminder of that. 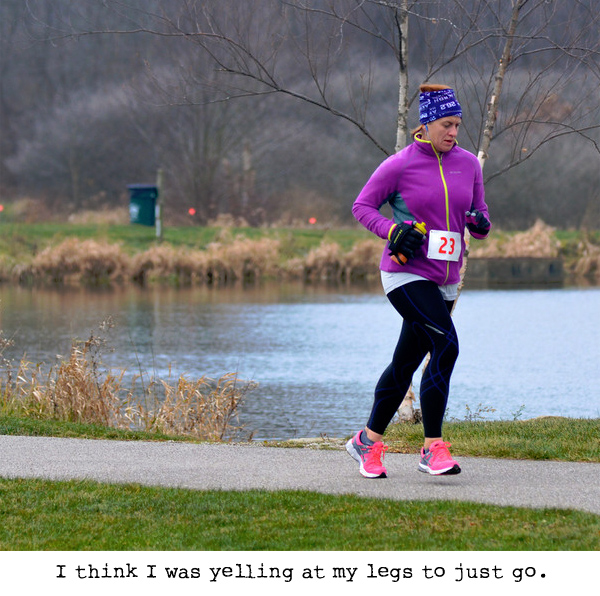 I came around the last loop of the 2nd lap, tried to look alive for the cameraman, and called it a day. My first ever DNF. Not sure if it counts in a Fat Ass 50k since the race is more like a “just come run what you want” type of situation, but I DID register for 25k, so in my mind it counts. I’m not that torn up about it, though. Because of the extra mile at the start, I ended up running 11 miles of the 15 on my schedule. My average pace was 11, so a little slower than I planned, but not as terrible as I felt. So, I am calling that good enough for today. 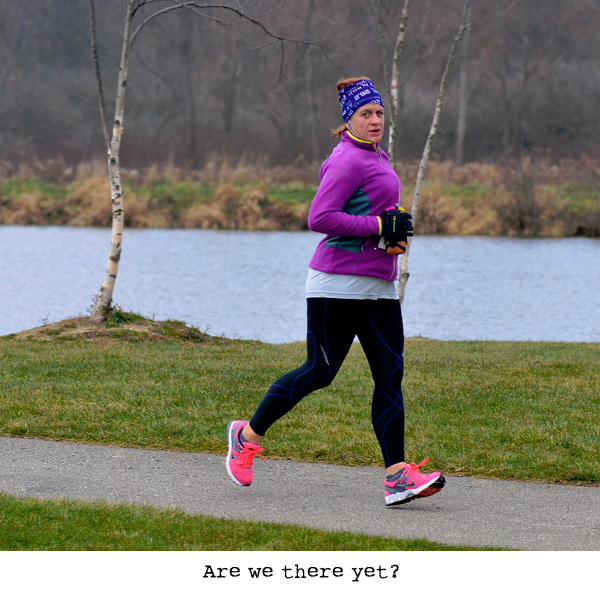 Not sure how I’ll get my long run in next weekend as I’ll be riding my bike from Cleveland to Cincinnati with Connie Gardner and The Patriot Runners. That should be interesting. Cross your fingers for good weather!

*Charles brought some bibs from old races and set up a timer on his iPad. Which is why me and Phil had the same number. I told them just put whatever his time was down for me. 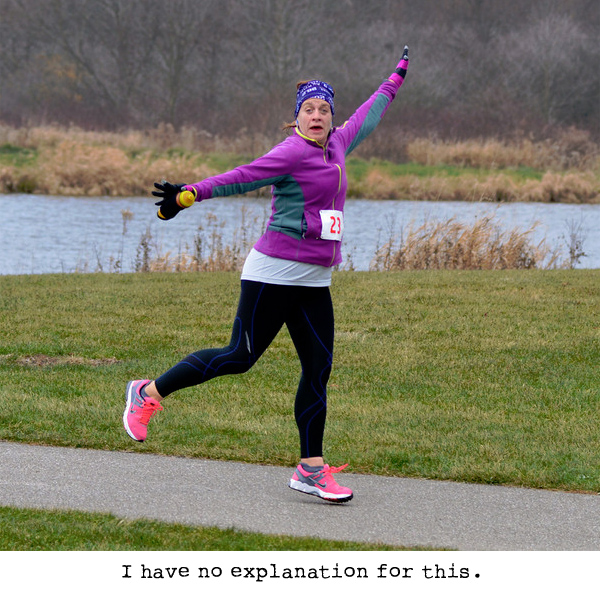