Day 3 started mostly uneventful. The weather has steadily improved each day to the point that 40s seemed downright balmy. Connie was running as strong as ever and the miles were ticking away seemingly fast. Well, at least for me, but I wasn’t the one running them.

About 15-20 miles in (or it might have been 3 or 40, who knows, it all starts to run together eventually) we got to the mobile aid station and she asked Mark to do another section with her. It was just as she was departing, and we’ve quickly learned that if she’s ahead of you, don’t bother trying to catch up. If you stop to pee, you’ll be chasing her for a half hour before you catch up, and that’s if you survive a 30 minute sprint. So anyway, Mark took off running with her, and they packed up the cars and moved down to the next stop. Only to realize they’d left her car behind as Mark was driving it. And it was running. With the door open. That would be the 2nd time we left Connie’s car behind with the keys in it. The first time was my fault, just so it doesn’t seem like I’m shirking my responsibility. I’m just waiting for the moment that we leave a PERSON behind. Maybe tomorrow.

There isn’t a whole lot to look at in this part of Ohio. Farms, farms, and the occasional farm. Vacant houses scattered about. We saw this particularly haunting looking one. 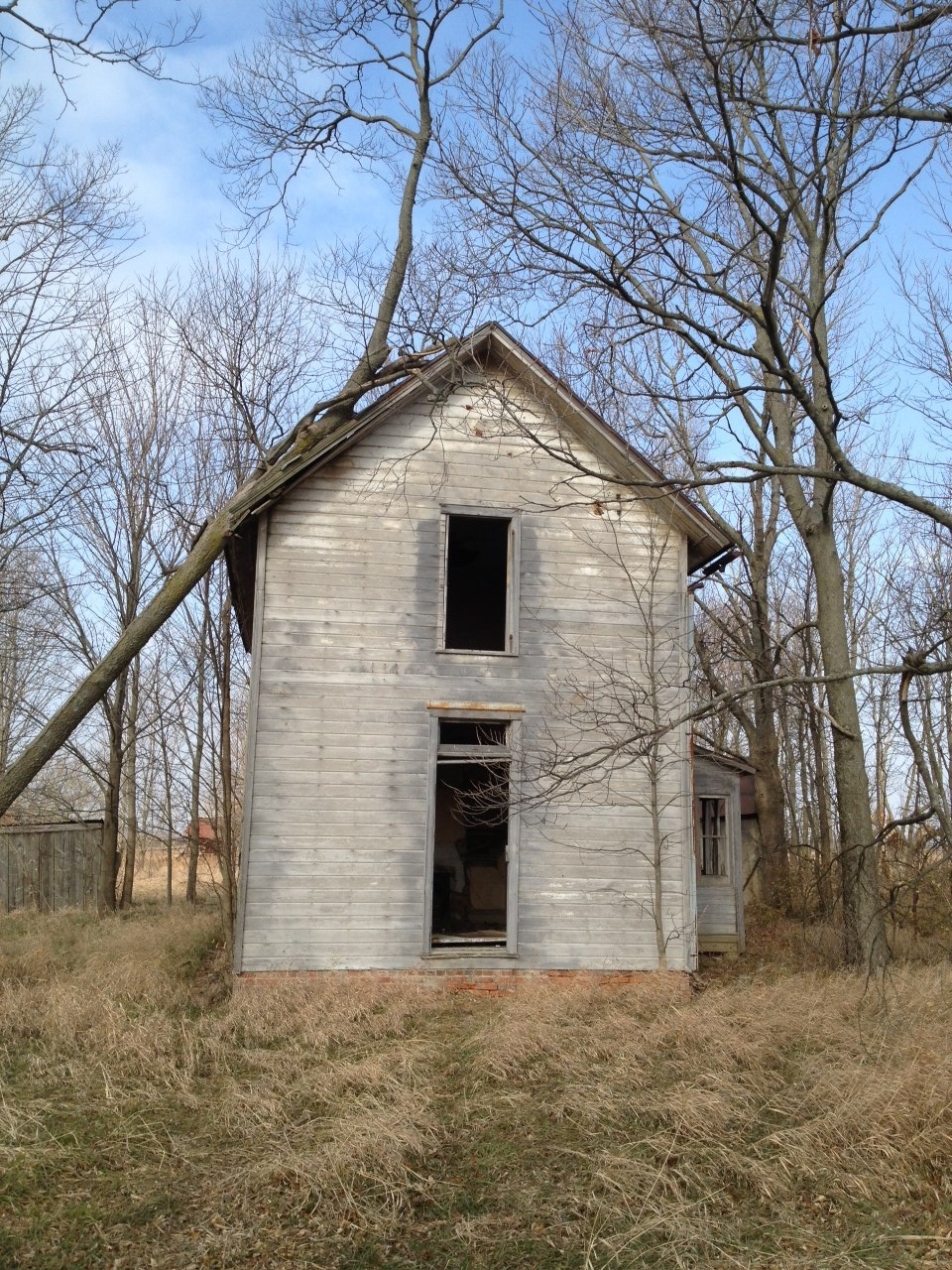 As we ran by, Connie said “Have you ever been in a house like that?” to which I replied “you could go in that one, it’s wide open”. She said “yes! Lets do it”, so we jogged back and checked it out. Nothing better to do while running 240+ miles across Ohio, right? Not like we have anywhere to be. 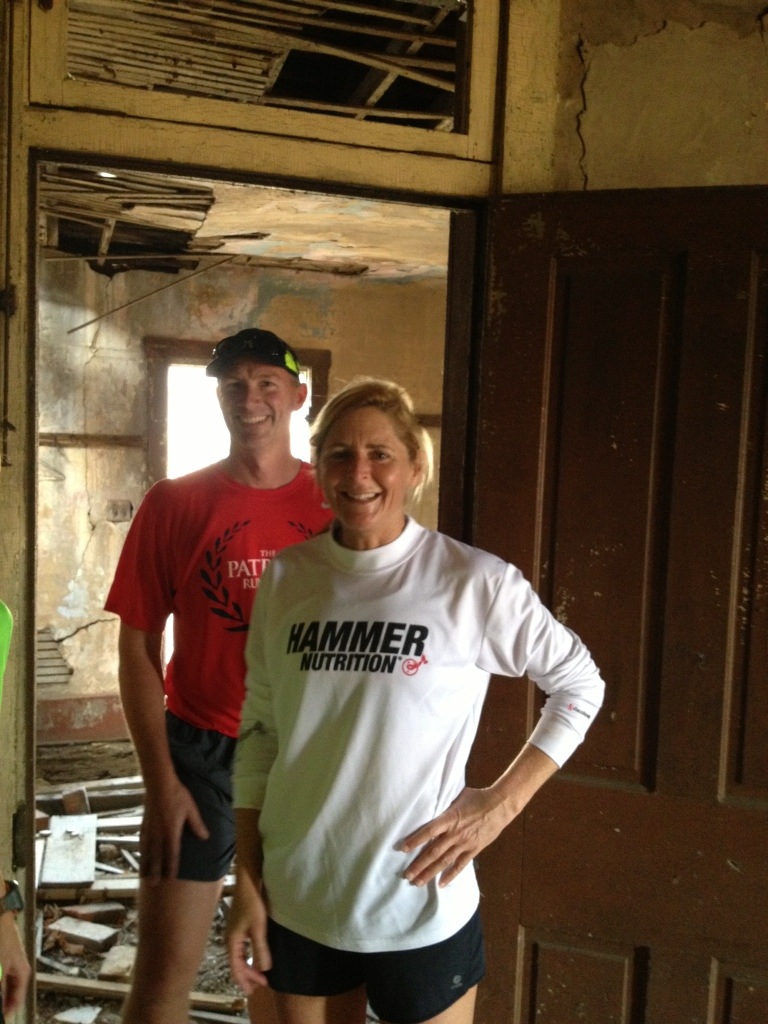 She thought it would be funny to take a picture of her coming out as if she’d just had a nap. She’s too much. Who is in this good of a mood after 150+ miles? 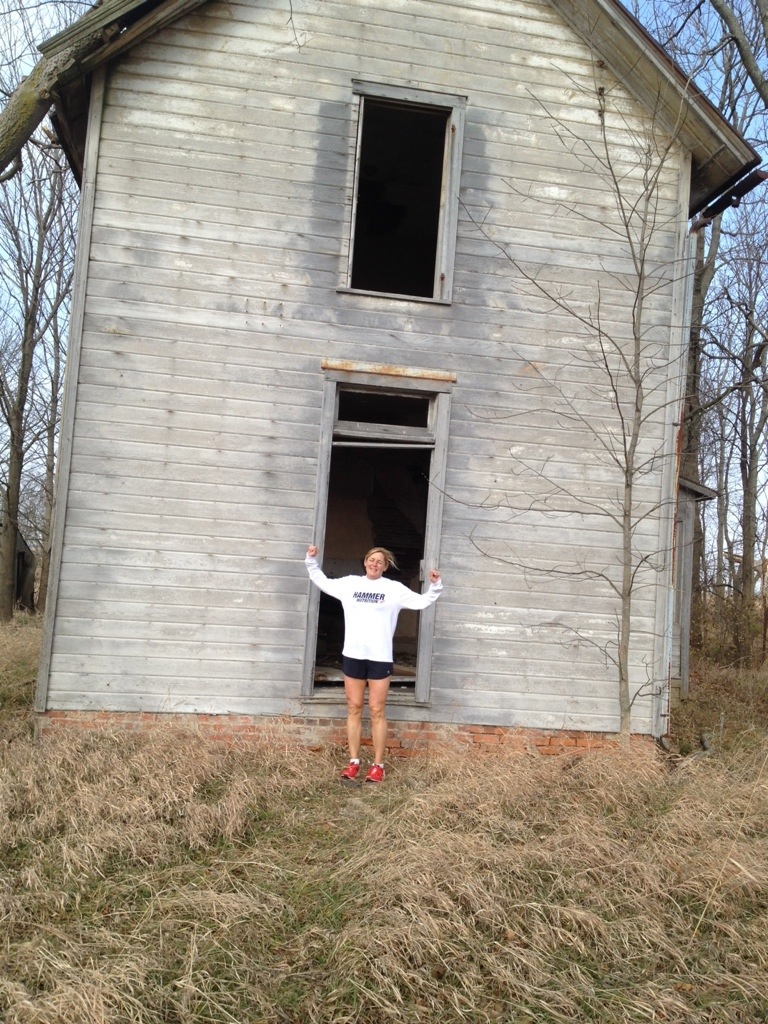 One of the big reasons she went north to south instead of the other way, was that Roy assured us that the wind would be at her back going south. Naturally, she’s had a headwind for 3 days. She’s barely complained about it, but in this small town, she turned back to me and said “Angie, look at that flag. See it? I want you to take a picture of that, and then show it to Roy.” 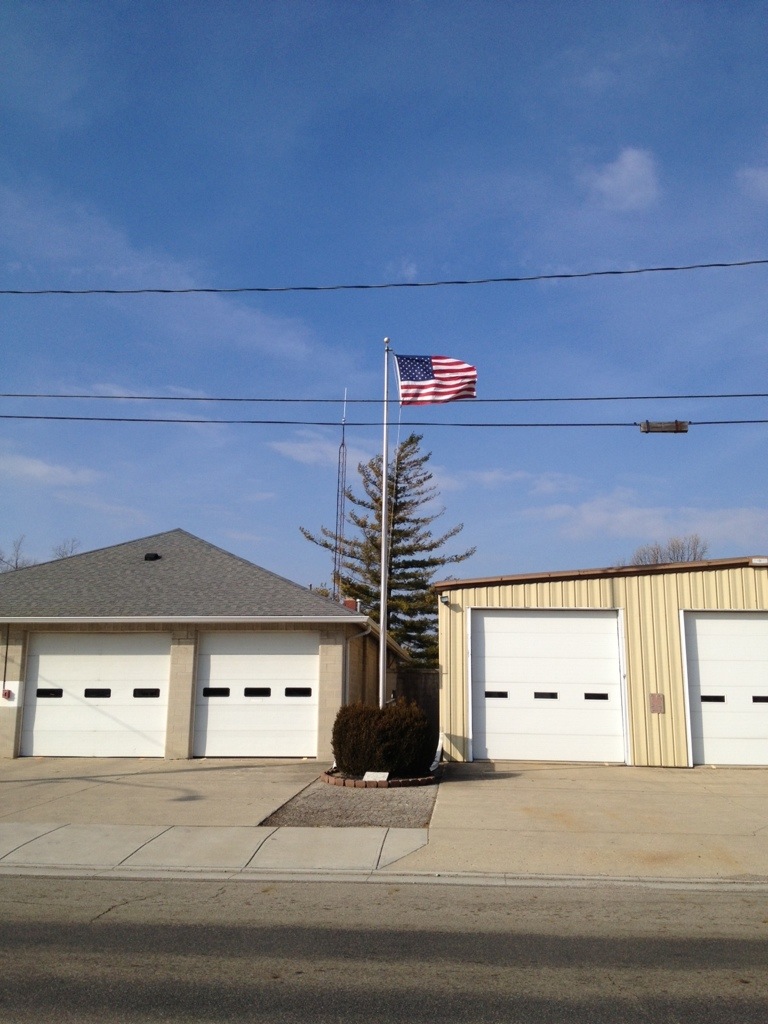 At one point of our trek down 42 South, we realized there was a bike path running parallel to us, so we moved up there. Which of course made the aid station almost miss us going by. We were looking for them, though.

She loved the endless line of telephone poles (she’s odd). 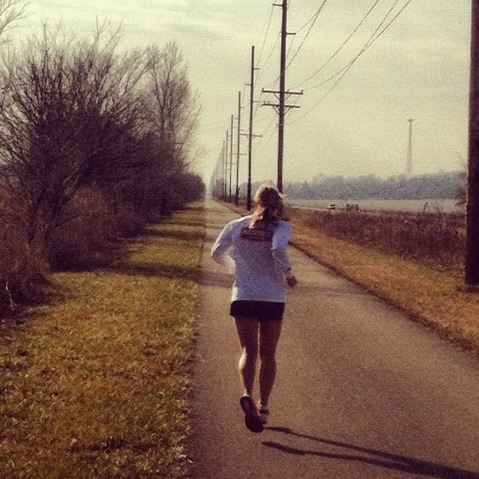 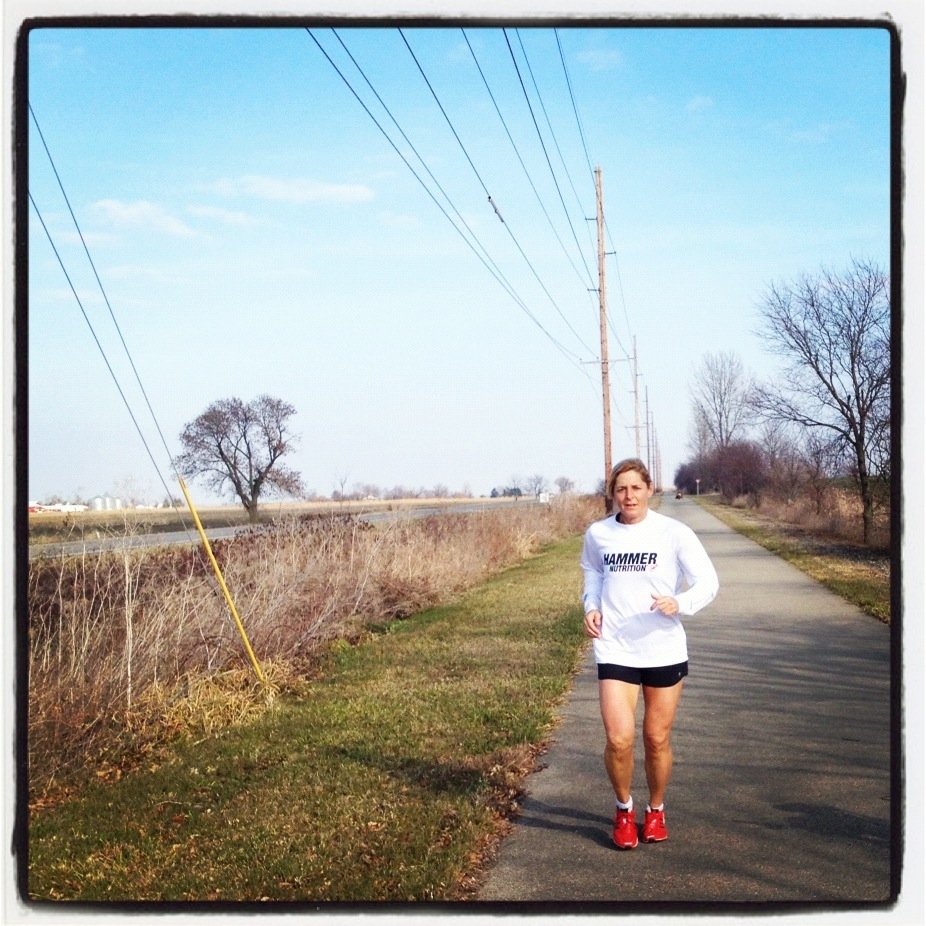 At the next intersection we saw a guy who told us to stay to the right because he had a prototype car of some type on the path that could get 1,000 miles to the gallon.
He assured me it was ok for us to not only look at it, but to take photos as well. So, here it is…

Connie looked at it and said “well of course it gets 1,000 miles to the gallon, it’s being pulled by a bike. You go back and tell that guy that I am more efficient than his stupid car”. 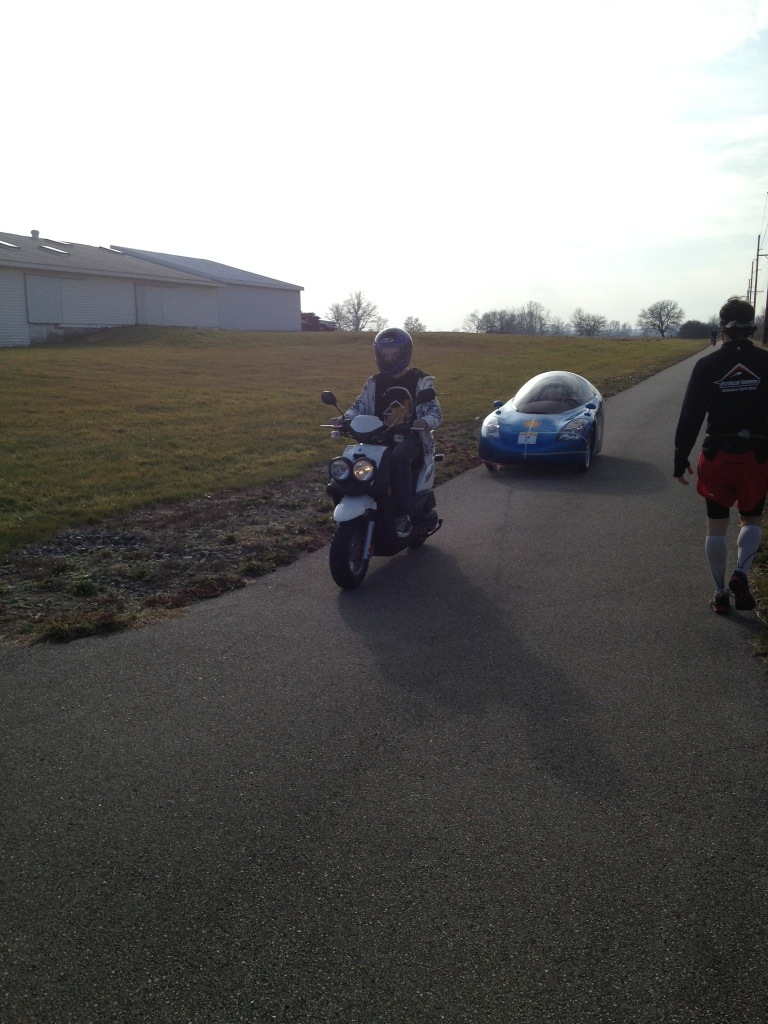 I don’t know if I mentioned previously, but she swears that the secret to ultra running is a spoonful of peanut butter every few miles. She says it has to be Skippy. Just to drive home how much peanut butter, this is what her jar looked like at the end of day 3. That’s a lot of peanut butter! 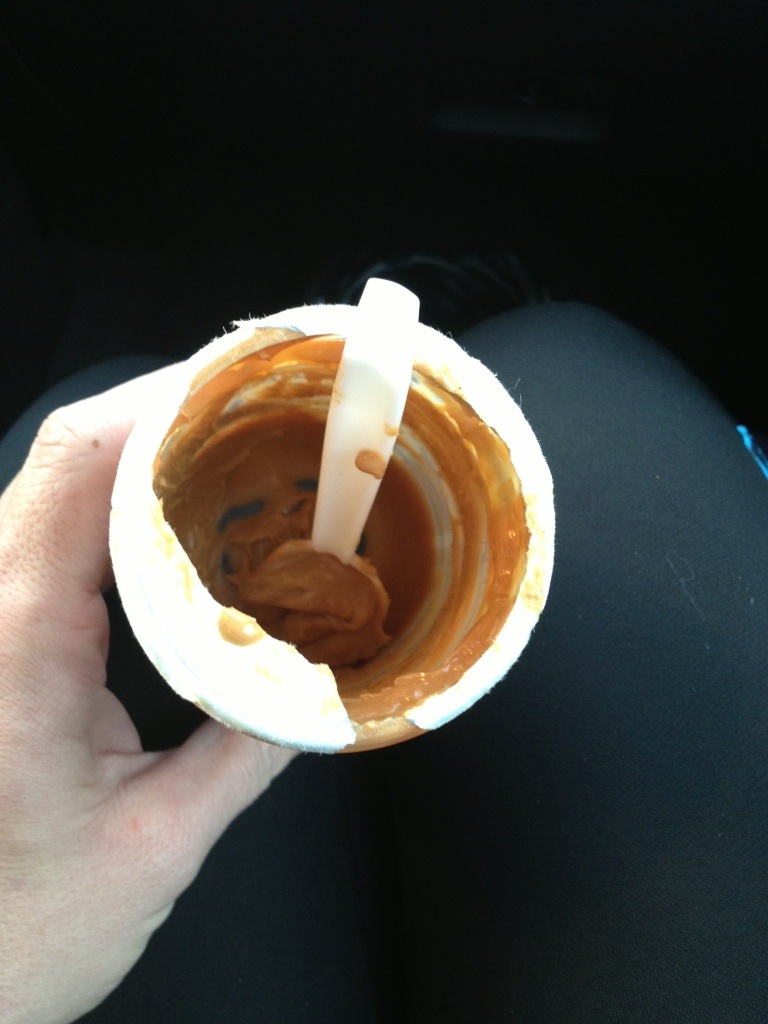 As we were nearing dark, she was nearing 200, so we were all pretty sure that was the goal she had in her head. However, she’d also mentioned wanting to try to get in 70 miles on day 3, which was still roughly 8 miles out. On day 2, we almost had to drag her off the road kicking and screaming because she felt good and wanted to go “another 15 minutes, another 15 minutes” and it was too dangerous. Small shoulder, fast traffic, just dangerous. So we just kept trying to sell her on the idea of hitting 200 and wrapping it up. We parked the beacon of hope exactly at the 200 mile mark and sent Gwen out to the road to tell her it was time to stop. Gwen is a great last line of defense because her mom won’t say no to her.

Surprisingly, she came off willingly. 200 miles done in 3 days with a smile on her face. When she got in the car she said “I’m feeling a bit under the weather today, so I’m glad that I was still able to run today.” and “I physically can’t run any slower than I did today”. For the record, she was moving at a sub-10 minute pace the entire day. She had a sub-11 minute average for the day, including breaks and bathroom issues and so on.

We loaded in the cars and headed over to Charles’ mother’s house for a delicious pasta meal and dessert and a foot rub for Connie. Incidentally, her feet look perfect, you can’t tell she’s run a single block. 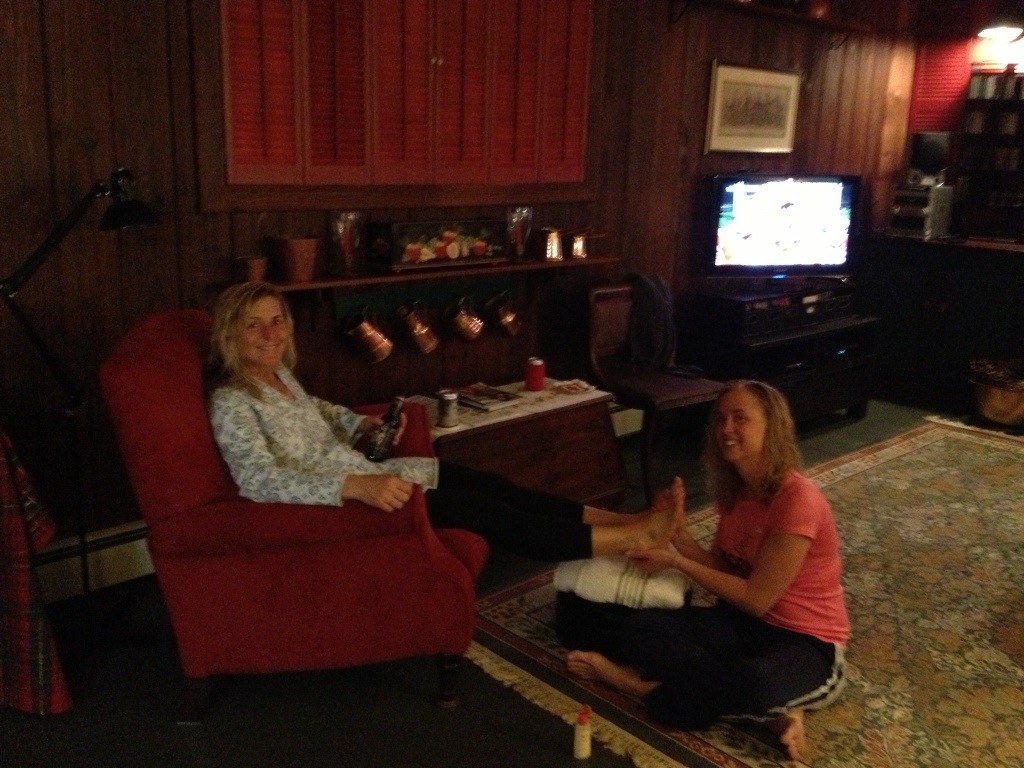