I arrived in Columbus Saturday afternoon since it’s 2 hours away and ain’t no way I’m getting up that early. I got checked into my room (once I asked AGAIN for the marathon rate they told me on the phone did not exist… and it ended up being a $60 savings, woot!), chilled for a few, hit the expo, ate dinner, you know all the normal stuff. Fell asleep before 10 and slept like it was my job. 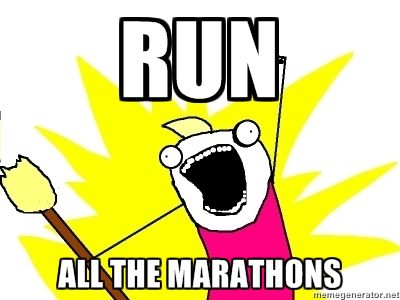 The ORIGINAL plan back in the summer when Phil (Best training buddy ever. Love him.) and I came up with this brilliant idea to run a million races/marathons this year was to do Akron as a training run, and then go all out at Columbus. Then I went 2/3 out at Akron, and he went all in, and got his PR there. So then the plan was he’d run me in at Columbus. A few miles? Half? It was all up in the air. As recently as Tuesday, I’d decided I didn’t want to run the full and was just going to do the half. He agreed and my blood pressure went down 30 points. The next day he informed me that he bought a full bib, we were doing the full, and he was going to pace me to 4:25. Blood pressure up 50. Still wasn’t feeling 100% physically since Akron, and definitely wasn’t 100% emotionally. But I’m in it uptoherenow, so lets do it.

Our alarms went off at 6:00, same time, different chimes. V revolting. Ate my yogurt/granola/banana, and drank my “delicious” hotel coffee. Then we moseyed our way down to the starting line.

The race started at 7:30, but they were super diligent about starting the runners one corral at a time, so we didn’t actually cross the start line until 14:45 behind the gun. I’ve been behind the gun at every race, but not by 15 minutes. Crazy. I was rather disappointed to have to start running, as I was having a fine time just standing around chatting. Furthermore, it was warm when we were all packed in there. Once we started running and spread out, it was COLD.

At mile 2, we saw the lead runners looping back. They were at mile 7. I wasn’t even warmed up yet and they were over 1/4 done. Side note, what to the Kenyans think of the signs that say RUN LIKE A KENYAN? Are they honored? Insulted? Running too fast to even read them?

Things went along pretty well for the first half, despite the need to pee. I have a rule in races… I will stop to pee, but I won’t wait in line. So, I figured I’d hold it until after the half cut off, and then would be able to go without a line.

At this point I said “I don’t think I can do this for another 10 miles” (there were actually 11 left, but I was in denial). He didn’t say anything, just looked at me like “oh, shit”.

We pressed on along through my least favorite part of every marathon, miles 17-22. I was really getting more and more tired with each step. Nothing necessarily WRONG, just tired.

Running through the stadium (17ish) was kind of cool, but I’m not sure it was worth the straight down and straight up hill we had to run to get in and out. No one laughed when we went down and I said “now how the hell are we going to get OUT of here?”.

By now I think we were both concerned about whether or not I’d even hit the PR time. At this point, Phil ran the pace I was supposed to be running and tried to talk me into just keeping up. I told him I hated him, but I still did what he asked. Or at least I tried. It worked out pretty well. I, of course, did not want to have had him do all this for nothing, so that kept me from just giving up and walking (my usual M.O. once I know my goal is out the window). It seemed that every time I got to that point, was when he’d turn around to see where I was. Most of the time he’d be pleasantly surprised that I wasn’t that far behind, and then he’d smile. As corny as it sounds, seeing his smiling face would carry me for another 5 minutes until we repeated the process. I was just about as miserable as I could be and still be moving, but I pressed on. I was pretty sure I’d slowed to end-of-Akron pace, or about 12 minute miles. I was also trying to avoid looking at my watch, but at one point I did, and happened to notice that my overall average pace had gone down from 10:18 to 10:16, which surprised me.

At mile 22 or so, I yelled “WHERE is the turnoff for the half marathon?!?”. No one laughed. Tough crowd.

We finally rounded the bend and I took off full sprint (probably 9:30 pace at that point haha) down the final hill. Phil waited for me and ran in next to me. Once again, medical rushed over. That’s 3 finishes in a row that my beauty overtook them.

I noticed just ahead of me a bunch of people holding signs that said WILL YOU MARRY ME SOME NAME? (he knew her name, I just don’t remember) I thought ‘oh how cute’ and then noticed the news cameras everywhere. At that point I was like ‘wait, this is like happening right now’ and I turned around to look for the girl just as she walked up and noticed it and burst into tears. Normally that would have had me sobbing, but I was exhausted and dehydrated and all it brought on was “aww Phil look how cute. Where’s my chocolate milk?”

On a day when I felt like crap for at least 75% of the race, 3 weeks after having run another marathon. So, while I once again did not break 4:30 (I’m 0 for 6 on that goal), I now know for a fact I am capable of doing it. In fact, my slowest section of this one was from 13.1-20, which just proves to me that my stumbling block is emotional, not physical. My previous PR was last year’s Akron, where I’d done 3x 20 milers in training, and was weight lifting and cross training like a fool. This PR I barely feel like I trained for, and I’m 10lbs heavier, and not in as good shape. So, I know I’ve got it next time. Plus, I PR’d, so I’m thrilled. Phil made all the difference – I’d have given up for sure without him there, since I already knew at mile 15 that it wasn’t going to be a good day.

I tell my clients all the time that you don’t know what you are capable of until you have to push through feeling horrible. This was one of those times. I guess sometimes we need help from a friend to help us see what we can do. Guilt is a powerful motivator. And a good friend and training partner is absolutely invaluable.

I don’t have a picture of us together during the race (which is weird, I swear he was next to me the whole time!), so here’s one from the summer. Good enough.  Just picture us in different clothes, in a different town, in the road instead of on the grass, with trees in fall colors instead of summer, wearing marathon bibs, and running instead of sitting.  It’s not that much of a stretch. 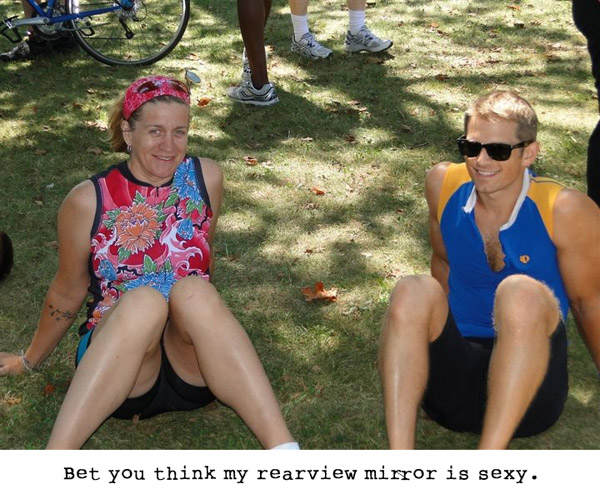